Showing posts from March, 2020
Show All

"Ew, your legs are so hairy": #everydaylookism and the normalisation of the hairless body 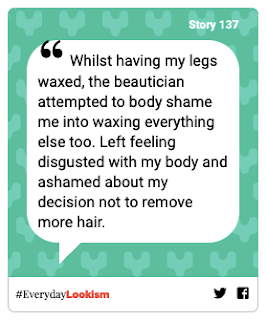 The changing norms of body hair removal are dramatic and illustrative. I have written previously about the rise in body hair removal as the ‘ canary in the mine’ . We now remove nearly all body and facial hair.  A survey of 7580 US residents aged between 18 and 65 found that “74% reported grooming their pubic hair, 66% of men and 84% of women” (Osterberg, Gaither, Awad, Truesdale, Allen, Sutclifee & Breyer, 2016, p.162) . A generation ago this didn’t happen; few women removed pubic hair and there was a time in 60s and 70s when underarm hair could be considered sexy. (Although there are arguments about how extensive the acceptance of body hair really was. Some think it was limited to the fairly small, fairly affluent, hippy culture.) The change from then to now is dramatic. As Rebecca Herzig argues “within a single generation, female pubic hair had been rendered superfluous” (2015, p.137).  It’s not just body hair we are obsessively removing, facial hair has also become a s
1 comment
Read more 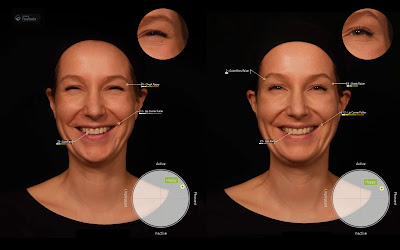 By Marsha Wichers , cosmetic doctor and designer. Medical technology will bring us more ways to perfect our appearance. Over the past decades, the use of Botox has increased enormously.  What started as a drug against muscle spasms and strabismus is now a widespread way of preventing and treating wrinkles in the face, and is becoming part of the beauty ritual of more and more women in the Western world. In my medical cosmetic practice in the Netherlands I see (mostly) women who come to me for advice. They want to look good for their age, or want to get rid of a tired look. But almost all of them say very explicitly ‘please make sure I will stay looking like me’, or 'I don't want to look overtreated and unnatural'. But what exactly are they referring to? We all have a feeling and an idea what this is about. But to precisely describe what makes a look unnatural, is quite difficult. That is why I decided to research and visualize this phenomenon during my master stu
Post a Comment
Read more
More posts