Can you be a feminist and wear make-up?

June 12, 2017
There is scholarly and popular debate over whether one can be simultaneously consider oneself a feminist and engage in commercial beautifying rituals such as wearing make-up, high heels, or be interested in fashion.

Although we may technically be in an era of fourth-wave feminism, the dispute between ‘third-wave’ feminists and ‘second-wave’ feminists on female consumerism remains largely unresolved. Second-wave’ feminism is often characterised by the critique of the portrayal of women in the media and advertising thanks to the iconic work of leading feminists of the day to include Betty Friedan’s “The Feminist Mystic”, Naomi Wolf’s “The Beauty Myth”, and Jean Kilbourne’s film “Killing Us Softly”. Crudely, the zeitgeist among second wave feminists was that that beauty, fashion, media and advertising were oppressive to the advancement of women and thus should be boycotted, protested and campaigned against. 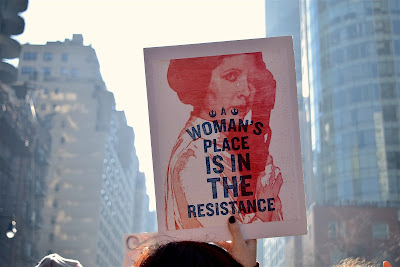 In contrast, ‘third-wave’ or ‘post’ feminists view the pursuit of beauty as a source of pleasure and agency, and that work women chose to do on their bodies and or appearance are interpreted as empowering acts. This has caused division within the feminist movement. Some contemporary feminists remaining aligned to second wave feminism on the issue of female consumerism, viewing the cultural preoccupation with appearance as a source of wasted effort and expense, a threat to physical and psychological well-being, and a trigger for workplace discrimination.

I spoke to Melissa Fabello on CAR’s Appearance Matters: the Podcast! on the topic of feminism and body image for International Women’s Day and asked for her perspective: can you be feminist and wear make-up?  Melissa by the way, is the managing editor of Everyday Feminism – a leading intersectional feminist online platform (my personal go-to resource for critical and insightful commentary on any feminist issue).  She both writes and speaks often on feminism, body image and eating disorders. Melissa’s response was refreshing and candid. She wears make-up every day, even when she doesn’t leave the house. Her take away point was about being a critical consumer and examining the way make up is marketed as a necessity for women stating that, “we should be able to make choices that feel good to us while also recognising how those choices can be oppressive or can buy into an oppressive system”. Melissa highlighted how it is this implicit and gendered messaging that is the problem, rather than the existence of make-up per se. Indeed, make up can be fun, a form of expression, creativity, and art.

It is also worth remembering that we live in a society where women are belligerently marketed to by (among others) the beauty, fashion, diet and fitness industries to look a certain way. Berating yourself or hating on others for subscribing to or bending under the weight of all the appearance pressures placed upon is not the best way forward for change. And I think this is the conclusion I always come to when this debate comes up. Being a 21st Century feminist is hard and it is difficult to know where to draw the line without completely disengaging with society. Should I stop listening to hip hop? Should I stop watching Mad Men? Should I stop reading Vogue? (Side-note, I have actually stopped reading Vogue and replaced it with Teen Vogue, although I am curious to see what Editor-in-Chief Edward Enninful does with the publication).

Ultimately, I can’t help but think this argument is a distraction from the bigger feminist agenda. In a time where the leader of the free world condones sexual assault towards women and denies the importance of women’s health and reproductive rights in public policy and spending, the feminist movement has bigger fish to fry than to quibble over whether or not an individual puts on lipstick or decides to shave her armpit hair.

You can listen to the full interview with Melissa Fabello on Appearance Matters: The podcast, episode 16: Feminism and Body Image on iTunes – Soundcloud – Acast.

Nadia Craddock is a PhD Candidate at the Centre for Appearance Research(CAR), exploring whether big business can meaningfully foster and advocate for positive body image. She produces and co-hosts CAR's podcast, Appearance Matters, which covers all topics related to appearance and body image research. You can find her on Twitter @nadiac322