Whole-body scanning: What are the impacts on body image?

March 04, 2019
Whole-body scanning has been used by those involved in fashion and clothing design for some time (Istook, 2000; Loker, Ashdown, & Carnrite, 2008), and many large-scale surveys have been conducted using whole-body scanning technology to acquire body measurement for clothing sizing systems (Fan et al., 2004).  A recent Verdict report (Kokoszka, 2018) lists Selfridges, Bloomingdales, New Look and Levi as retailers that have used whole-body scanning to measure customers in store. The report also predicts that advancements in technology will soon enable mobile devices to scan the body accurately, which would enable people to access 3D images of their bodies through their phones. In addition to this, some UK supermarkets now offer whole-body scanning facilities, so customers can access whole-body scanning and associated 3D printing where they buy their groceries (Griffiths, 2014; McCrum, 2015).

Clothing specialists at Manchester Metropolitan University and University of Manchester have worked with a number of retailers, body scanning men and women in an attempt to improve industry sizing systems. They have found that although ethical procedures were strictly upheld during measurement procurement, a very small number of women were distressed when shown their 3D body models. Another observation was that, in general, men appeared to be less concerned about having to undress to their underwear during the scanning process and were less sensitive about seeing images of their bodies than were women.


Access to body scan images in public spaces such as supermarkets and other retailers is largely unregulated, which raises the important question of how people respond to seeing their bodies in three dimensions on a computer screen, and how access to these kinds of images affects body image, particularly in a context where many women and men are dissatisfied with some aspects of their appearance (Grogan, 2017; Murray, 2016). We have been interested in this issue for the last five years and have run a number of studies to investigate women’s and men’s accounts of whole-body scanning and how it affects how they see their bodies.

What is whole-body scanning?

Whole-body scanning normally involves people undressing to their underwear, and being scanned in a small cubicle or curtained area. The person is then able to view a detailed 3D screen image on the computer screen, and may also be shown a 2D printed version of the image along with a list of body measurements. Scan images show people their bodies from all angles.  Although some scanners enable people to view photo-realistic images, body scan images normally look something like the image below which is known as a “point cloud”, so skin colour/smoothness and other surface factors are not visible. These kinds of 3D images give people unique views of their bodies as the image can be rotated on the computer screen so that people can see their bodies from all possible angles. 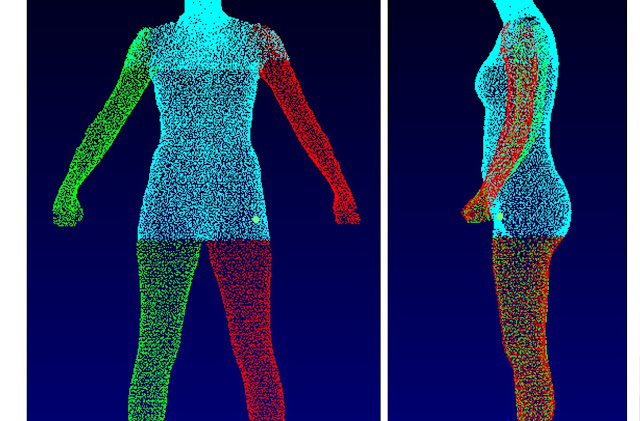 How do people react to being whole-body scanned?

In our first study in this area, we ran interviews with twenty 18-40 year old UK women after they had been whole-body scanned (Grogan, Gill, Brownbridge, Kilgariff & Whalley, 2013). Women said that they had found the images informative in providing a realistic and objective view of their body, and were generally quite positive about how their bodies looked on the scans. These results suggested that women may feel more positive about their bodies following scanning. However, we were aware that this was a self-selected group of women who were all relatively young (18-45 years), and all within a narrow range of dress sizes (UK 10-14).

For our second study we contacted a larger and more varied group of women who had been body-scanned at a fashion event. Respondents were ninety-one women aged 18-81 years old who were asked to tell us about their experiences of scanning, retrospectively and anonymously on an open-ended online questionnaire (Grogan, Gill, Brownbridge, Warnock & Armitage, 2016). Responses were much more negative than in the 2013 study. Respondents reported feeling threatened and vulnerable when seeing their bodies on the printed output and reported increased body dissatisfaction as a result of viewing their scans.

In our most recent study with women, fourteen women were interviewed before and after scanning (Grogan, Siddique, Gill, Brownbridge, Storey, & Armitage, 2017). This group were similar in both age (22-45 vs.18-45), and Body Mass Index (18-29 vs 19-28) to those in the original 2013 study. Twelve women expressed “surprise” and “shock” at how they looked in the scan (which was sometimes slimmer and sometimes heavier than expected), and focused on negative elements of the scan, even when asked to talk about positives. All women were comfortable with the scanner process, and found being scanned quicker and easier than expected, but thought that other women, if vulnerable, would find viewing the scan challenging.

Although men tend to report lower levels of body dissatisfaction than women, many men are dissatisfied with their appearance (Franko et al., 2015), so we need to know more about how scanning might affect men’s body image. In a bid to understand men’s experiences of scanning, we recently interviewed ten men aged 18-39 years, before and after scanning (Grogan, O’Brien, Brownbridge, Gill, Cole, and Armitage, 2019).  Seven men reported looking shorter, fatter, thinner, and/or less symmetrical on the scan than they had hoped, though three were pleasantly surprised by the images. Men were interested in scans, both as an objective view of their bodies and as to motivate healthy eating and exercise, suggesting that whole-body scanning may encourage men to exercise and eat more healthily. For instance, one man said “It serves as a very good wakeup call”. However, seven men had become more negative about their bodies as a result of seeing their body scans, suggesting that scanning needs to be carried out with supervision and support for men as well as for women.

At present, it is unclear as to whether whole-body scanning may be generally beneficial or harmful to body satisfaction, and some men and women report positive reactions to their scans. However, many women and men reported negative reactions, and had noticed new parts of their bodies to critique having seen their bodies on the computer screen. The increased body concerns reported by some of our interviewees suggest that if whole-body scanning is used in supermarkets and other public places, it needs to be administered with careful supervision, to avoid increasing body-related concerns. Further work is needed to understand how body scanning should be delivered in these kinds of public contexts to avoid potential harm. This is particularly urgent given that men and women can currently access whole-body scans in clothes retailers with no support at all, which could leave some people less body satisfied as a result of body scanning.

Sarah Grogan is Professor of Psychology Health and Wellbeing at Manchester Metropolitan University. She is interested in body image and body scanning, as well as links between body image and health-related behaviours such as smoking, UV protection, and alcohol consumption.


Kathryn Brownbridge is Senior Lecturer in Fashion design at Manchester Metropolitan University. Her formative years in fashion were as a designer for her own fashion company in Manchester, making clothes for clubbers. In 2001, Kathryn completed an MSc, which led to an interest in how the use of 3D technologies, including whole body scanning, could be used to improve fashion practice and people’s perceptions of their clothed and unclothed body.

With claims that the recent rise in coronavirus cases in Leicester was partly due to 'sweatshop' working conditions in some textile factories, we revisit Maeve McKeown's post from 2017 on this issue:  Should we feel shame about participation in sweatshop labour?  Most people know that clothes are produced under appalling conditions and that garment workers are paid poverty wages.  And yet consumption continues at a fast rate. The liberal philosopher argues that individuals can act rationally and do what duty requires, that ‘our goodness (or badness) is entirely up to us’[1]. If we believe this story, it is easy to paint people who frequently purchase clothes as greedy and materialistic, leeching off the suffering of sweatshop workers. But feminist philosophers have long pointed out that people’s actions are constrained by oppressive social norms. Clothes are loaded with meaning and many people (especially women) are crippled with anxiety about what to wear.  Type ‘d
Read more
Follow @BeautyDemands
Tweets by BeautyDemands