May 28, 2019
Why risk cosmetic surgery? Why risk infection, pain, possibility of life-long complications, just to look prettier? All surgery is dangerous but facelifts aren’t the same as (say) knee replacements that enhance our lives in obvious ways; with knee replacements we weigh up the risks versus the benefits and decide the risks are worth it. And choosing to have cosmetic surgery abroad, adding a foreign country into the mix, that’s just madness!

Contrary to popular opinion, ‘unnecessary’ cosmetic surgery may improve life as much as a ‘necessary’ knee replacement. Of the 100+ recipients of cosmetic surgery tourism that Ruth Holliday, David Bell and I interviewed, observed, and travelled with for our forthcoming book Beautyscapes: mapping cosmetic surgery tourism (MUP, 2019),  all had carefully weighed risk against benefit. They told us that they hoped cosmetic surgery would give them better opportunities at work, in romance, in day to day living. Further, they sought cosmetic surgery abroad, taking an additional risk in order to access services that were too expensive at home. We call them patient-consumers. 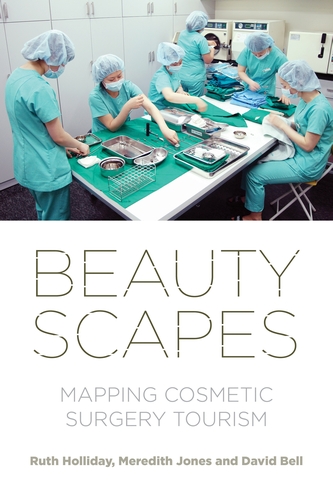 Sociologists Ulrich Beck (1992) and Anthony Giddens (1990) argue that the current period of ‘Reflexive Modernity’ not only produces ‘goods’ but also many threatening and risky ‘bads’. The management of these risks is part of living in a ‘Risk Society’.  This intertwines with neoliberal cultures that urge us all to ‘take control’, to ‘do something’ to improve our lives and become our ‘true selves’. In neoliberal cultures individuals learn to calculate risk; to manage it in order to be the best we can be (because we’re worth it). Risk is thus made into an individualised, responsibilised choice. This partly explains how risk is managed in relation to cosmetic surgery tourism.

Different individuals and groups understand and calculate risk differently (Douglas 1992) and people are differently positioned in terms of risk–benefit calculations. When we asked a room full of academics at a conference if they would improve their appearance with a wave of a magic wand, the vast majority—men and women—said yes. But very few said yes when the improvement relied on surgery. Most middle-class and tertiary-educated subjects enjoy sources of cultural and financial capital separate from their appearance, and thus for them the risks of cosmetic surgery outweigh the benefits (this is mitigated somewhat by gender, since women are currently still judged more on their looks than men, especially when women’s looks are integral to their income—either from employment or spouses). However, for those with less cultural capital and fewer other sources of value, the risk of cosmetic surgery can become worth taking. If one’s body is already commodified for the labour market then one’s aim may well be to add value to it or at least to limit negative evaluations or devaluations. For example, we interviewed two Australian prison guards having facelifts in Malaysia who felt they were no longer able to do their jobs properly because they looked like ‘grannies’.

Cosmetic surgery tourism patient-consumers attempt to know and manage risk. They take on this responsibility themselves, spending considerable time and effort researching and learning about clinics, surgeons, agents, destinations, flights, accommodation, aftercare, compression garments, breast implants, when and how much to exercise after surgery, etc. In fact, managing risk is a significant new form of labour that patient-consumers perform. In cosmetic surgery tourism, risk is individualised and is carried by the patient who chooses where to travel, what treatments to undergo, which surgeons and agents to use. In public health, as Annemarie Mol (2008) notes, risk is managed by the institution and embodied by the figure of the (often paternalistic and unchallengeable) doctor (‘the doctor knows best’). Cosmetic surgery tourists can use their ‘consumer power’ to avoid the potential abuses of this approach, but this comes with the cost of shouldering the work of managing risk personally.

The cosmetic surgery tourists we worked with were responsible consumers who, for example, tried to avoid debt. Their surgeries were often funded by windfalls or long-awaited inheritances and compensations. Jess, who travelled from the UK to Poland, told us:

I thought about it for about a year. A year, seriously. I had a consultation here, in the UK, but it would have worked out really expensive and they wanted to give me a loan, so it would have put me in debt. This way I could save for six months and get it done and not be in any debt.

Patient-consumers are aware of the criticisms leveled against them for having surgery and for travelling abroad. But we found they were far from frivolous or flighty. All had researched surgeons and destinations thoroughly (not easy because qualifications are multifarious and independent registers of successful operations don’t exist). All were savvy about how websites can be deceptive, for example with rival clinics posting negative anonymous reviews. Thus, they were more likely to rely upon word-of-mouth recommendations. Social media sites were therefore crucial, providing direct access to other patients. Patient-consumers know that choosing the right clinic, surgeon, recovery place etc is vital because cosmetic surgery is largely under-regulated: they know that there is little legal recourse in their own countries, let alone across national borders, if things go wrong.

If complications develop at home, there are social sanctions for accessing the NHS. Popular opinion is that the NHS shouldn’t be responsible for people’s foolish decisions; that in some way cosmetic surgery tourists with complications have brought them on themselves. But note how profoundly gendered this attitude is: would the adventurous young man who rode a motorbike without a helmet in Bangkok, crashed, and needed NHS care on his return to the UK be scorned or told he was wasting taxpayers’ money? And yet people (about two thirds of the patient-consumers we interviewed were women) who seek surgery to improve their work, social and romantic prospects—to become better neoliberal citizens—are thought unworthy. Cosmetic surgery tourists are very aware of being considered a ‘burden on the NHS’ and their practices before, during and after surgery revealed they felt responsibility for this and sought to minimise its impact.

The ‘consumption’ of cosmetic surgery is part of the neoliberal imperative to constantly strive for self-improvement. But this is full of choices and risks. Patient-consumers bear the weight of this responsibility, and they are the ones who are blamed if things go wrong.

Meredith Jones is a Reader in Gender and Media Studies at Brunel University London. She is a feminist scholar specialising in theories of the body and is one of the pioneers of social and cultural research around cosmetic surgery. Her books and articles, especially ‘Skintight: An Anatomy of Cosmetic Surgery’ (Berg, 2008) in the area are widely cited. Meredith's latest major publication (with Ruth Holliday and David Bell) is 'Beautyscapes: mapping cosmetic surgery tourism' (MUP, 2019) based on data collected as part of the project Sun, Sea, Sand and Silicone). She is currently working on a monograph: ‘Velvet Gloves: A Cultural Anatomy of the Vulva

Beck, U. (1992) Risk Society: Towards a New Modernity, London: Sage.
Douglas, M. (1992) Risk and Blame: Essays in Cultural Theory, London: Routledge.
Giddens, A. (1990) The Consequences of Modernity, Cambridge: Polity Press.
Mol, A. (2008) The Logic of Care: Health and the Problem of Patient Choice, London:Routledge.
cosmetic surgery