“Girls who wear make-up are fake”: #everydaylookism stories tell us you’ll never get it right.

Putting on your face is something that very many of us do on a daily basis. On average, women will spend “29 minutes putting on make-up to achieve a 'natural look'”, and a third of us “never go out without make-up”. And, over a lifetime women on average spend 136 days (3276 hours) “getting ready for a night out”.

Once upon a time respectable women didn’t wear make-up. Only ‘painted ladies’, sex workers, wore make-up; made-up eyes, lips and cheeks were how they advertised their trade. Gradually make-up became OK, so much so that in the Second World War, lipstick was believed to be vital to morale - it was not rationed and was imported across blockades with other ‘necessary’ supplies (Dyhouse, 2011, p.82).

Wearing make-up is now routine; required for work, special occasions, or to ‘face the day’. Make-up is such a part of who we are that we can raise money by not wearing it! The 2015 ‘bare faced’ selfie campaign raised £8,000,000 in six days for cancer research. The non-made up face is rare, and apparently make-up even makes us look more competent and professional. In a study on the perception of females’ (aged 25-50) faces with and without make-up, “ratings of competence increased significantly with makeup”, and likeability and trustworthiness also increased, although less significantly (Etcoff, Stock, Haley, Vickery & House, 2011, p.8). But this is not always the case and, ‘too much makeup’ can have the opposite effect. A 2018 study found that “regardless of the participant’s sex or ethnicity, makeup used for a social night out had a negative effect on perceptions of women’s leadership ability.” (James, Jenkins & Watkins, 2018, p.540). And in some professions, wearing almost any make-up marks you as frivolous, unintelligent and not to be taken seriously. Yet while some professions require less make-up than others, most of us are doing more. For example, some surveys suggest that the average women’s make-up routine in 2016 takes 27 steps, compared to just eight in 2006. As most of us wear make-up, not wearing it becomes abnormal – more of a political statement than a fashion choice. What is the right amount and how can we get it right?

Some bullying statistics suggest no matter what we do we can’t do it right!

This looks like an impossible circle to square and that’s before you take into account that 63% of US men agree that “women mainly wear make-up to trick people into thinking they’re more attractive”. (YouGov, 2017)

The #everydaylookism stories back this up. We can be shamed for wearing make-up: 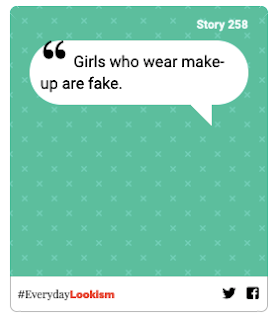 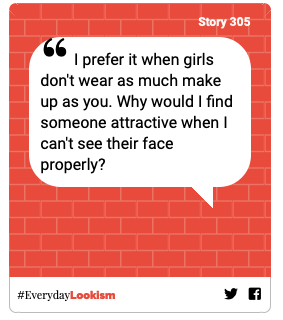 And shamed for not wearing it: 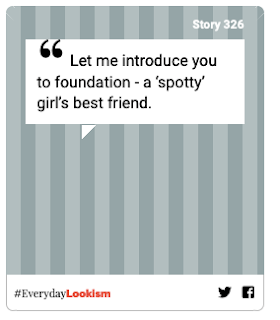 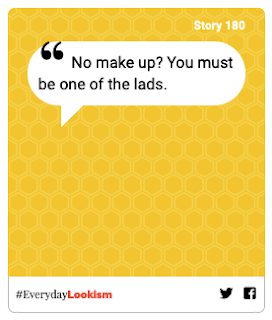 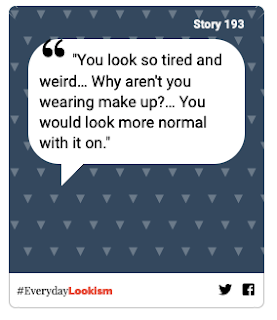 We can be shamed by those who love us: 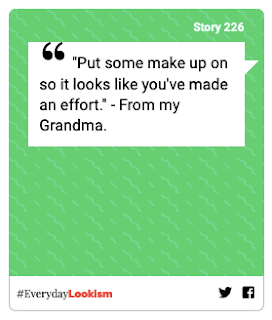 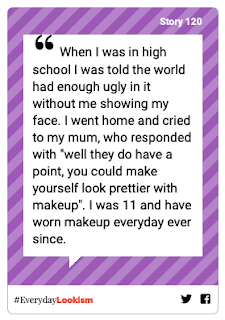 It doesn’t even have to be us wearing the make-up to be body shamed: 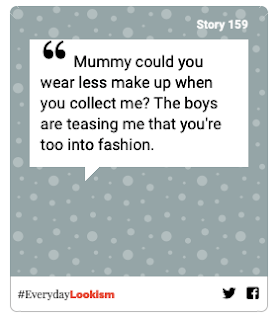 These #everydaylookism stories show we can’t get it right. Too much and we’re fake, too little and we haven’t made an effort or shown respect. This is going to get more difficult as make-up options change, and more alternative ways of making-up the face become available. Semi-permanent make-up is becoming increasingly popular and looks like it is here to stay; permed and dyed eye-lashes, high definition brows and tattooed lips, are increasingly evident. When do you decide to do your eyebrows? Those who don’t, wonder at those who do. “Don’t they know they look abnormal?” a journalist recently asked me, commenting on the new trend. But no, they don’t, as they are not abnormal in their peer group. No more abnormal than the flapper who cut her hair and put on lipstick in the 1920s. Normal is a moveable feast.

There is no right amount of make-up. There may be norms for different professions – more for the air-hostess than the professor – for different events – more for a wedding than for walking the dog, but even these norms are being unsettled as we make-up not for the real world but for the virtual world. The average 16-25 year old women spends 5 and a half hours a week taking selfies, and “33% of women redo their makeup before taking photos”. If we have to be camera ready at all times, to post our perfect lives, then increasingly we have to be perfectly made-up, with make-up which is exaggerated and odd offline, even if it looks great online. If we believe the projections, the amount of time and money we spend on making-up is only going to increase. In 2018 the global make-up market (for the face) was worth $31.3 Billion in 2018 and it is projected to rise to 36.5 billion by 2024.

The bottom line is it’s almost impossible to navigate, which is another reason we should try to reduce the pressure, to tone down the critique. #everydaylookism seeks to end body shaming. If it becomes unacceptable to make negative comments on people’s appearance – including their make-up – then the pressure will decrease. We might still worry we are not getting it right, but we won’t worry we’ll be called out and shamed. Let’s change the culture, let’s call out body shaming as people shaming and put a stop to it. Share your make-up story with us at: everydaylookism.bham.ac.uk.