Seeing the Self Through Selfies: Beauty, Selfies and Cancer

When I was diagnosed with Stage 2 Breast Cancer two days before my 28th birthday, the first question I asked was “Am I going to lose my hair?” “Probably,” the nurse answered, as I felt the ground fall away from under my feet.

My hair wasn’t the best hair in the world (it had recently recovered from a horrendous, self-imposed quarantine fringe), but it was still mine. Well-meaning comments of “it will grow back” and “it is only temporary,” whilst being true, delegitimised the very real sense of grief I felt. Every time I touched it in the lead up to my first chemotherapy session, I imagined it not being there and felt a lurch in my stomach. I couldn’t imagine my face without eyebrows or eyelashes, and in my obsessive reading about side-effects, I convinced myself that my nails were going to fall off. Of course, being bald temporarily was preferable to dying, but classic media images of cancer patients haunted me. It felt like my identity was being stripped away, leaving me with nothing but illness.

Beauty practices and selfie-culture are often positioned as symbols of narcissism and vanity, with writers like Jonathan Freedland stating that “the selfie is surely the ultimate emblem of the age of narcissism” and a Swansea University study contending that selfies “fuel narcissism”. In 2021, a journal article published in the Psychology of Popular Media concluded that “grandiose and exhibitionistic aspects of narcissism are tied to selfie-taking” . Likewise, frequent headlines such as “A Generation of Self-Absorbed Social Media ‘Influencers’ Needs to Grow Up” reinforce the image of a failed generation lost to their phones. The media is particularly keen to scoff at young women who participate in taking pictures of themselves or make money online from beauty, with Gaby Hinsliff writing that young women’s association with narcissism may stem from their “overindulging in all kinds of navel-gazing, from the cult of “self-care” (taking time out to cosset yourself) to compulsive posting of selfies.”

Such perspectives are overly simplistic and incredibly gendered, erasing the ways that make-up, fashion and selfies enable women and non-binary people to cultivate their identity. Indeed, in her fantastic article for Gal-Dem, Leah Cowen explores the ways that self-portraiture became an “important tool” throughout the Renaissance for “women and other marginalised artists.” She notes that, despite women’s bodies frequently being depicted by male Renaissance painters, women were not allowed to attend life-drawing classes, consequently turning to self-portraiture as a form of self-expression. Cowen writes that selfies are similar to self-portraits in that they are a low-cost method of shaping the self, arguing that:

[…] A whole load of boring sexist and heteronormative discourse around selfies attempts to suggest that selfie-takers are insecure and seeking external validation. This jars with my largely anecdotal hypothesis that the vast majority of selfies don’t get posted online. I’d wager that most selfies simply sit quietly in private albums on people’s phones. They are scrolled through from time to time for a quick reminder of aesthetic excellence, much like dusty old dukes who had oil paintings of themselves hanging in their bedrooms. 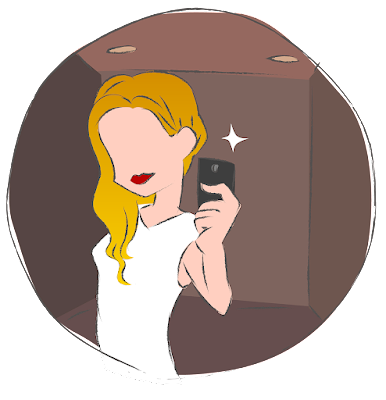 For me, it has been a lifeline. In the aftermath of my diagnosis, I watched countless YouTube and TikTok beauty vlogs providing tips for women undergoing chemotherapy on the best products for dealing with dull skin, flaky nails and rashes. I poured over Etsy for the best turbans and wigs, starting a collection in an array of colours and lengths. Perhaps the best decision I made was to get my eyebrows micro-bladed after reading an article that suggested this helps with maintaining face shape after hair-loss. Recently, I noticed that my eyebrow hair had mostly fallen out, but I could only tell by looking very closely. After my hair started to fall out in clumps in the bath, I put on new make-up and earrings, then ceremoniously shaved my head and took a selfie to send to my friends.

It’s worth noting that I was only able to experiment with my style due to having a secure job. The indignity of losing your hair, eyebrows and eyelashes (among other side effects) is lessened significantly when you can have ‘fun’ with your appearance, an experience not afforded to people forced onto statuary sick pay (a pitiful £96.35 per week) or in insecure employment. There are prescription wigs available on the NHS and great charities like Wigs for Heroes which provide grants for women to purchase wigs and other items, but that doesn’t answer the question of why our government thinks it is acceptable for people to face potential financial ruin whilst battling cancer.

Of course, there are problematic beauty structures; historically, Whiteness and thinness has been synonymous with attractiveness, a default position that is often replicated in the mainstream media. But, engaging with beauty practices and selfie culture as a method for enjoying one’s own appearance can be a resistance to these standards. For example, trends like #BlackGirlMagic and #Effyourbeautystandards encourage women outside the Eurocentric beauty ideal to position themselves within “contexts of beauty, desirability and dignity.” This is not to suggest that such campaigns alone will change the racism, ableism and heteronormativity that underpins normative assumptions about beauty. Nevertheless, carving out space for bodies outside of the mainstream conceptualisation of beauty can only be positive.

Structures of femininity are innately paradoxical; women are constantly bombarded with images of beauty products, whilst simultaneously ridiculed for engaging with beauty culture. The intense backlash and ridicule of ‘the selfie’ and other examples of online beauty culture (e.g. beauty vloggers) reveals the ways that capitalism profits off women’s insecurities. Taking joy from one’s appearance, therefore, is in direct contestation with the market and expectations of femininity as existing solely for the male gaze, rather than for oneself.

For me, the end result of embracing my new appearance was significant - when I looked in the mirror, I saw myself, rather than someone with cancer.  Selfies acted as a marker of this new version of myself, hardened by my experience and comforted by my new knowledge of beauty tips and tricks. It doesn’t have to be such a drastic example to defend selfies/beauty culture though… maybe women just think they look nice and want to share that.

Dr. Amelia Morris is a Lecturer of Sociology at the University of Law in London, Bloomsbury. Her research expertise focuses around gender, the body, health, austerity and poverty. In 2019, she published ’The Politics of Weight: Feminist Dichotomies of Power in Dieting.’ Her second book, ‘Lean Times: The Body Politics of Austerity’ was co-authored with Dr. Nicola Smith at the University of Birmingham and will be submitted for review in autumn 2021.