In today’s world, it can often feel like society writes the main definition of beauty for us, and in doing so gives a template for the ‘ideal’ body. From an early age, we are surrounded by images in the media, placed there for us to absorb and aspire to. It is perhaps not all negative; on some level I don’t think it’s a bad thing to be curious to and inspired by what we see around us. To me, the problem arises when doing so results in us bringing comparison into the mix and moving further away from who we are.

Growing up I can recall so many moments of wanting to know and follow the latest fashion trend and wishing I looked, or didn’t look, a certain way. Fast forward to 2016 when I was diagnosed with stage 3c ovarian cancer at the age of 27 and my relationship with my body and appearance changed almost overnight. It was only a matter of days before I was to enter the world of chemotherapy, surgery and menopause; all which came with their own set of physical and emotional side effects.

The day I was told what the treatment plan would be, I heard it all in a state of shock. I remember not saying or thinking much; that was until I heard that I would start to lose my hair in a matter of weeks after starting chemotherapy. It was only then that I started to cry. I was being told about losing my fertility and the major operation that I would need to undergo which would leave me with a vertical scar from my chest to pelvis. But yet all I could think about was that I would have no hair. At the time this seemed the cruellest part of it all. Why?

I remember thinking that I didn’t want people to be able to look at me, see I had no hair and know that I had cancer. Thinking back, this seems so far from what I see and feel now. Every day women make choices about their hair, or no hair, which are based so many factors other than cancer but back then, it was all I could see. I also feared how I would feel about myself. Would I hate looking in the mirror? Would I even know who was looking back at me?

After discussions with my oncologist, I opted to try scalp cooling; a method of aiming to avoid or reduce hair loss during chemotherapy. It was an intense regime of hair care and wearing a freezing cap for hours at a time. At the start I was fixated on the process; I was vigilant to every strand of hair I saw fall out, and washing my hair with an immense amount of care at times consumed my evenings. It wasn’t just the hair on my head; I also did all I could to preserve my eyelashes and eyebrows using every and any product to help strengthen them. I would look in the mirror each morning to assess which hairs had held on through the night and which had not made it. I can still feel the relief when I saw them still there - another win for Laura against cancer. Another way to avoid people seeing my cancer.

It feels strange to think back to that time now because, looking back, of course everybody around me knew I was ill. I was very open about it so there was no element of secrecy. I know now that actually it was more a focus for me than for other people. It was my own fear about my appearance and what was happening on the inside as well as outside my body. As the years have gone on, the other thing I have understood about that time is that it was also to do with control. It certainly wasn’t part of my thinking then, but looking back now, I know that one of the main reasons hair loss had distressed me so much was because I had been plunged into a world where nothing was in my control. My body no longer felt like it was mine and so being able to take some form of control was somehow a way of still being part of it all; a small act of resistance. And a big act of distraction.

Going through cancer was a daily battle of uncovering myths and stereotypes about the disease and side effects, often those which have been strengthened by the media and what we see cancer portrayed as. One of the biggest I came across; things are better once treatment is over. In some ways this isn’t wrong, but what and how you feel is not always the same as what you expect, or perhaps others might expect you to feel. Life after cancer treatment to me felt like another or next step of treatment. And the irony for me; it was then that my hair really began to thin and my eyebrows and lashes fell out. And what surprised me most was that I didn’t feel what I had anticipated I would. I actually felt OK. More than that, I felt proud. I saw it as a sign of my strength, resilience and survival. I enjoyed buying scarves for my hair and after a while I didn’t even bother trying to recreate my eyebrows.

Having now been part of the world of cancer for five years, I have had the fortune of meeting some of the most incredible people going through similar experiences. One of the things I am most grateful for is being able to hear and see how other women dealt with their own hair loss. One person in particular, who embraced and invited hair loss into her life in such an inspiring way, meant that when I started more chemotherapy after my surgery, my feeling and attitude to hair loss was entirely different.

My cancer diagnosis and treatment has meant that I entered menopause at 27. A life stage which should have been decades away but which I have now lived with for almost six years. Sometimes, usually in the mornings, I feel like a young woman trapped in an older woman’s body. I live with the physical and emotional impact of menopause; sometimes I cry and sometimes I feel intense anger and sadness about what my body does or doesn’t do, or won’t be able to do. A few years ago, I also made the decision to undergo risk-reducing mastectomy and reconstruction surgery. I wanted to have the chance to be in control of my breast cancer risk. I went through a process of loss and adjustment to another change to my body. It was a challenge at times but I’m forever grateful to have been able to take action. 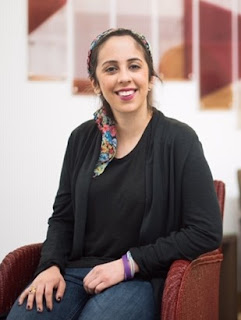 For me, one of the ways I have learnt to cope and live with these changes to my appearance is to show kindness and compassion to my body. It’s not the body which social media might have you believe is the ‘ideal’ one. It might not be able to grow babies or regulate its temperature all that well at times, but to me it’s pretty great. I’d be lying if I said I always think this; some days I really don’t and I get caught up in thinking about how I might look and feel different if cancer hadn’t been there. But I try as best as I can to remind myself that I’m only human. And that my body is so very much more than an ‘ideal’ and did a whole lot more than we can sometimes be led to believe our bodies can do. It alerted me to something wrong, it fought with me and it kept me well. And it has a collection of beautiful scars to show for it. It’s unique to me and I’m thankful for them all.

One of the questions I often get asked when I talk about my research is how much longer I think the trend for full pubic hair removal will last. I’m hesitant to give an exact expiry date if I’m honest. But I think this question opens up into broader discussions about what impact social, political and economic change has upon our bodily surfaces, and how embodied ideals of womanhood and femininity can both shift and remain constant over time. More revealing than any answer I might be able to give about the potential longevity of the Brazilian wax, is the asking of the question itself.  It demonstrates an understanding of pubic hairlessness as ‘current’, constructed, transitory, and it encourages conversation about where the norm has originated from, and why women in particular feel pressured to conform to it.  My Google Alerts notified me recently of an online survey examining men and women’s pubic hair grooming preferences, undertaken by Cosmopolitan.com , and suggesting that p
Read more
Follow @BeautyDemands
Tweets by BeautyDemands