Need we be bikini-ready and wrinkle free? Women's accounts of ambivalence towards socio-cultural appearance ideals - By Sarah Grogan 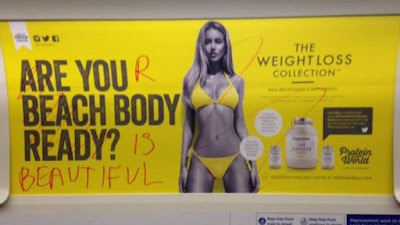 Slimness is generally seen as a desirable attribute for women in prosperous cultures, and is associated with self‑control, attractiveness, and youth. The ideal female shape is epitomized in the slim but full‑breasted figures that Gail Marchessault describes as “the physically impossible, tall, thin and busty Barbie‑doll stereotype”. Muscle tone is also important, and the 21st century ideal is a firm‑looking body for women as well as men. Looking youthful is also prized. In interviews and in surveys, many women report various degrees of body dissatisfaction which does not seem to vary by age. Various studies have shown that women between 18-80 report dissatisfaction and have similar kinds of body ideals (slender, “hourglass”) though their role models may differ. For some women, this links with “appearance-fixing” behaviours such as dieting and cosmetic surgery. Most studies find that the majority of women in westernized cultures diet at some time in their lives, and the 21st century has seen a significant increase in the numbers of women having cosmetic surgery. Over 20 million cosmetic procedures were performed in 2014 worldwide, including record numbers of women having Botox. Socio-cultural views on cosmetic surgery have also seen a significant shift in the 21st century. Media coverage gives viewers access to before, during, and after footage of cosmetic procedures, which can have the effect of normalising cosmetic surgery and making it seem accessible to women from across the social spectrum.

This paper will investigate women’s accounts of “appearance-fixing”, drawing on data from interviews with women in the UK and US over a twenty year period. Women’s accounts of decisions to have breast reduction and breast enlargement will be considered, including those from women who have decided to have, or not to have, reconstructive surgery following mastectomy. Women’s responses to seeing their bodies in whole-body-scans, and their faces aged in age-progression facial morphing studies will also be discussed. Interviews where women talk about their responses to media imagery and clothes sizing will also be examined, including considering women’s spontaneous comments about their bodies whilst trying on clothes. It will be concluded that we, as women, have complex and ambivalent responses to socio-cultural pressures to look slender, toned and youthful. While we critique and try to resist these pressures, they seep into our daily lives in significant ways, affecting our experiences of embodiment and our interactions with others. Suggestions for building resistance will be considered, drawing mostly on work from positive and feminist psychology. Interview data from women who have resisted social norms to build a sense of what is beautiful that goes beyond the slender, well‑toned, mainstream cultural ideal will be presented. These will include accounts from women who body-build, who have recently given birth (and have retained positive and affirming views of their bodies), and who have chosen not to have breast reconstruction after mastectomy. Their strategies for developing and maintaining positive body image, and for avoidance of body surveillance and body shame, will be reviewed as possible strategies to improve body image in other women.