January 20, 2020
Our Beauty Demands blog is 5 years old this year! We have had many brilliant posts over those years, so we're going to revisit some of these, starting with the ever-important topic of social media. Below is Emilie Lawrence's discussion on body positivity, which introduces a paper she presented at our workshop back in 2016:

In this post, Emilie Lawrence (UCL) discusses her work on body positivity discourse as it plays out on social media. 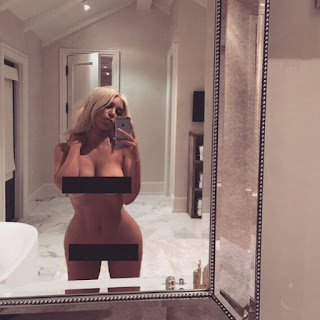 The paper I am presenting at the forthcoming Beauty Demands workshop explores social media sites as platforms for creating networked communities (Papacharissi, 2010, 2011 & 2012) notions of the performative body (Butler, 1988) and embodied subjectivity (Braidotti, 2013.) I will explore body positive feminism ( an emerging form of online and offline activism stemming from Love Your Body (LYB) discourse, ‘positive, affirmative, seemingly feminist-inflected media messages, targeted exclusively at girls and women, that exhort us to believe we are beautiful, to remember that we are incredible and that tell us that we have the power to redefine the rules of beauty’ (Gill and Elias 2014; 179) complicit beauty and glamour labour whilst discussing Kim Kardashian and women troubling dominant beauty norms.

I will draw upon the ethics of nudes, Kim Kardashian as a body posi powerhouse and how the body positivity movement aims to selfie into significance  bodies that are routinely rendered invisible in mainstream media as they continue to privilege and promote thinness as ideal and reinforce Eurocentric, narrow beauty ideals as the norm. By making visible marginalised bodies, the movement aims to disrupt and challenge beauty norms.

The body posi movement, and Kim’s position within it has been critiqued; it is exclusive despite reprimanding society for marginalising and privileging certain bodies; hashtags that exist to celebrate body positivity are full of conventionally attractive women who DO conform to many of the standards society sets out as ideal – white or passing, able bodied, heterosexual, feminine. Disabled bodies are conspicuously absent, as are queer bodies on the most popular hashtags. Whilst criticising mainstream media for marginalising many women, the body positivity movement online seems to have its own criteria for what counts as subverting or troubling norms and what it will allow to be flawed; Stretchmarks and saggy breasts are ok but anything that tries to transgress these narrow parameters of what constitutes a middle finger up at beauty standards is noticeably missing.

Kim’s body might tentatively trouble dominant norms but ultimately she is ‘the right kind of wrong’ – whilst not overtly thin, she displays an hourglass figure that is celebrated for being sexual, sexy and sensual. Her boobs and bum might be big but her waist is small and nipped in – thus reinforcing the idea that the only parts of a woman body that are allowed to be big are those that are aesthetically pleasing to a man. In addition, she is often critiqued for her complicity in routine beauty work and her commitment to the performing of glamour labour. I will be exploring how far we can position Kim as a body positive figurehead whilst criticising the beauty labour she is heavily involved in. 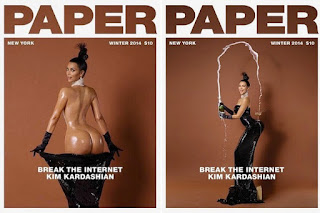 A further issue at play within the body positivity movement is nudity. Many women use feminist rhetoric to explain their choice in posting nude body shots or images of them in underwear. It is ‘empowering’ or ‘liberating’ to be in control of the way in which their body is viewed and presented. This performance of bodily autonomy is significant in that it raises questions of power dynamics and objectification vs self-sexualisation. Women using the body positive movement as justification for posting nudes online often argue that it is in order for them to have the power over the representation and presentation of their bodies. It could be argued that women’s bodies are so often open to scrutiny and objectification that choosing to post nudes online is to trouble this behaviour by controlling the imagery and semiotics.  Kim’s infamous ‘break the internet’ shoot for Paper magazine has become a cultural phenomenon with memes, copycat shoots, countless articles and column inches devoted to interrogating the purpose and impact of the shots. Completely nude, she is subverting the coy, innocent naivety so often associated with sexy shoots – so often women are told to leave something to the imagination, ‘don’t give it away for free’ and here Kim resists that ideal by proudly displaying all of her body. In addition she has published a book entirely comprised of selfies. We could argue that there is a confidence in the shots; the selfies taken by Kim herself eliminating external input and potentially giving us an insight into how she wants her body to be seen, to be considered.

However, there are numerous counter arguments that claim that the women engaging in this form of body positivity action are simply objectifying themselves – inviting sexual objectification under the guise of feminist empowerment.  Are the women involved sexually liberated and freeing themselves from the male gaze by choosing to publicly engage with their bodies and therefore denying men the upper hand? Or are they merely fuelling the notion that women exist for male consumption but via feminist discourse that renders the behaviour hard to critique? In addition, what are the ethical considerations involved when using these nudes in social research, removed from the context (i.e. a twitter hashtag or individual’s timeline) or assumed audience? 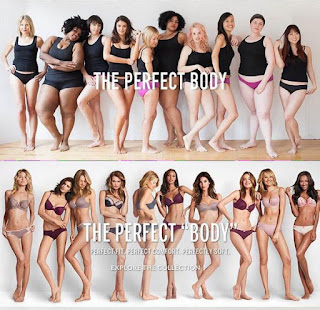 LYB discourses are important and powerful because of the way they appear to interrupt the almost entirely normalised hostile judgment and surveillance of women's bodies in contemporary media culture’ key yet few body positive sites or spaces manage to fulfil this promise of championing and celebrating all bodies, instead merely constructing new parameters of acceptability. The body positive discourse itself, exists within a neoliberal arena – utilised in marketing, co-opting of feminist rhetoric, LYB campaigns position empowerment, higher self-esteem and body satisfaction as possible through the consumption of products. This contradictory, complex situation where women are told to love their bodies as they are whilst simultaneously expected to be consuming products designed to ‘better’ themselves has been discussed (Gill, 2007; Johnson & Taylor, 2008) and much of the existing academic literature on body positive movements is critical of the concept although research into body positive feminism is limited. My research aims to argue that they are interlinked yet distinct areas and that body positive feminism moves beyond the simplistic essentialist notion of loving your body as is and instead recognises the radical and political acts inherently present in subverting beauty norms. This paper will suggest that body positive feminism, whilst utilising similar narrative and notions to the body posi discourse, possesses a self-awareness that is playful, deliberate, reflective and reflexive.

Papacharissi, Z. (2012). Without You, I’m Nothing: Performances of the Self on Twitter. International Journal of Communication,


Emilie Lawrence is a PhD candidate at UCL. Her work is focused on the construction and performance of feminism online; using Twitter as a situational context, Emilie is currently exploring body positivity and the co-optation of feminist rhetoric in LYB narratives and discourse.