Be Ashamed of Body Shaming

January 06, 2020
Feeling ashamed of how we look has become normal. Hardly any of us think we make the beauty grade. We might even think there is something odd with someone who is perfectly happy with how they look. For some this anxiety is low level and periodic – a bad hair day once in a while, or a fleeting thought that we wish we could lose a few pounds when we glance in the mirror. For others it is overwhelming and almost constant, a deep shame which stops us doing all kinds of things. In the Girls’ Attitudes survey 2016 conducted by Girl Guiding UK, “47% of girls aged 11–21 say the way they look holds them back”. This is nearly half of young women who are willing to admit that how they look limits what they can do.

The list of where we fail, and what we feel ashamed of is almost endless. It is hard to find a body part which can’t be thought of as failing, and flaws - perceived flaws – can be found in every body. No matter how much you might fit the ideal, flaws can be found. Selena Gomez, who was once the most followed person on Instagram, recently spoke out about how she was body shamed over her fluctuating weight.


As appearance matters more in a visual and virtual culture and our bodies become ourselves, and this is one of my main claims in Perfect Me, then the shame that attaches to body failure is going to increase. This shame is exacerbated and compounded by practices of body shaming. Body shaming is ubiquitous, part of our routine and everyday experience. Negative comments about appearance are constant, they happen to those in the public eye. How often does a celebrity get asked about the work they’ve had done? Or shamed for some aspect of their appearance. It’s a news story if a celeb shows body hair on a catwalk or, heaven forbid, shows an extra roll of fat or wobbly thigh.

And it’s not just those who are in the beauty business who get called on this. Remember the furore over whether or not Mary Beard was too ugly for television? If a Professor of Classics can be body shamed – and there be discussions in broadsheets about whether she is too ugly for television – then appearance matters in a visual culture.  What possible difference could meeting the appearance grade make to whether Mary Beard is an effective Professor of Classics; surely it is her knowledge and ability to communicate that matters? But in our visual culture, the demands of beauty apply to all of us, and in selfie culture, all the time. We all have to be camera ready – ready to post our happy families, fun friends, and great colleagues. If we don’t get it right, we are fair game. Deserving of the snide comment, the snigger, or the trolling. But why? Why do we think it’s OK to say negative things about appearance? We don’t think it’s OK to make very many types of negative comments, so what makes comments about appearance acceptable? It is hard to understand why we don’t call out comments which make people ashamed of themselves. We call out other negative comments -why don’t we call out these? Appearance bullying is the most common kind of bullying and totally prevalent:

“94% of teenage girls have been body shamed”. (Bullying Statistics)

57% of 12-20 year-olds who have been bullied think they were bullied because of “attitudes towards [their] appearance”. (Ditch the label, 2018)

One possible explanation of why we put up with these comments is that we have not yet named body shaming for the wrongful and discriminatory practice it is. We know we are hurt, and we know we are uncomfortable, but we find it hard to say why. There are a number of reasons for this; sometimes we are told it’s a bit of fun, but it doesn’t feel like fun.

Consider these stories we’ve collected as part of #everydaylookism: 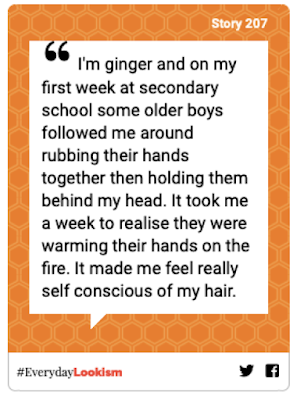 The boys might have been having fun, but the person who was body shamed was not.

Other times they are supposedly well meaning, and from people we love. 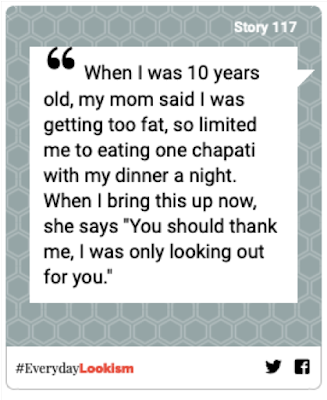 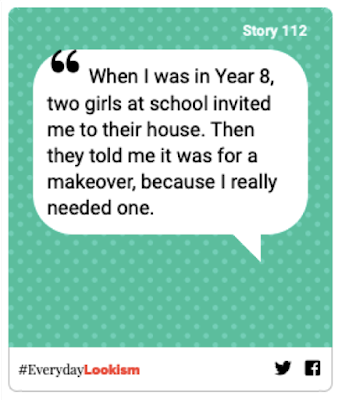 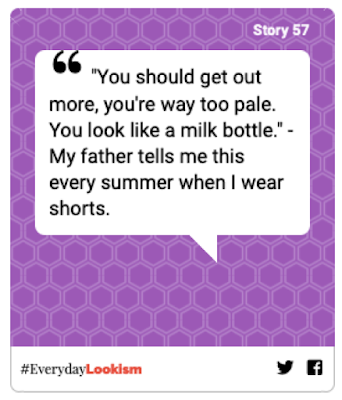 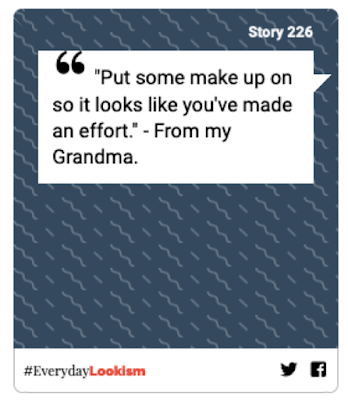 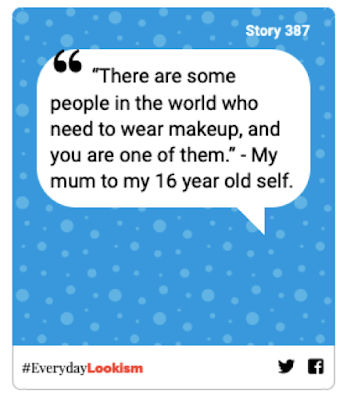 These stories show clearly that negative comments about bodies hurt. They cut deeply and it doesn’t matter what the supposed intention was. We need to recognise and name such behaviour. It is lookism. It is never OK. No matter what the intention. ‘But she meant well’ is not an excuse. This used to be the line on sexism: ‘You should be flattered he pinched your bum, cat-called you, or abused you in some other sexist way’. Rubbish. And we wouldn’t buy this for a moment today. Intention is irrelevant. Sexist comments are not OK, and nor are lookist comments. Just as sexist comments belittle, violate and make us ashamed, so do lookist comments.

If we name it and call it out, it stops. Sexism might not be over, but the shame is shifting. It shifts to the perpetrator. ‘You can’t say that’, ‘You should be ashamed’ we say to the blatant sexist. It’s not OK in work, in public, and we have regulations to prevent it. We can begin to do the same with lookist comments. We can say it’s not OK, and we don’t want to live in a culture where people can say such hurtful things. Body shaming is always people shaming. Lookism is hurtful and discriminatory, and we should call it out. One way to do this very publicly is to share your body shaming story. Not to feel ashamed, but to kick back. To say enough is enough and we won’t put up with lookist comments, just as we won’t put up with sexist comments.

#everydaylookism is modelled on #everydaysexism and is a way to kick back by sharing our lookism stories.  Join the fight – upload your story anonymously. Say body shaming is always wrong. Every story is a drop in the ocean, but together they are a tidal wave.