Just a phase? Why we should worry about girls’ unhappiness with their appearance

November 07, 2016
The Good Childhood Report 2016 highlighted declining levels of girls’ happiness with their appearance in the UK, while boys’ happiness remains stable. There is now a sizeable gender gap in happiness with appearance among young people aged 10 to 15 in the UK. International comparisons show that this gender gap is by no means inevitable and does not exist in many countries.
More Than A Quarter Of A Million Girls In Britain Are Unhappy, Report Reveals

Huffington Post, 31st August 2016
Differences between girls’ and boys’ happiness with their body and appearance have been a recurring theme of our research programme on children’s well-being since we launched our first survey report in 2010. Based on responses from over 6,000 children, it showed a growing gender gap in feelings about appearance as children got older. At ages 10 to 11, a similar percentage of girls and boys were unhappy with their appearance; but by the age of 14 to 15, twice as many girls than boys were unhappy with their appearance. 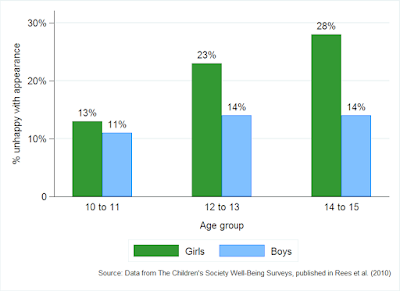 The reaction of the media and professionals to these findings was a mixture of concern and a sense that perhaps this was an inevitable feature of adolescence, particularly for girls. This may have been understandable given the lack of a broader context to the findings. However, two additional perspectives we have since gathered challenge the idea that such gender differences are inevitable.
First, our most recent Good Childhood Report showed that the gender gap is increasing in the UK. In 2000, the gap between girls’ and boys’ happiness with their appearance, on a scale from 0 to 10, was 0.3. In 2010 it was 0.5 and in 2014 it was just over 1.0.  Over the most recent five-year period, boys’ happiness with appearance has remained fairly constant at around 7.5 out of 10, while girls’ happiness has fallen from 6.9 in 2010 to below 6.6 in 2014. 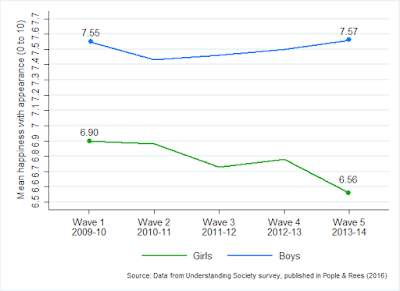 Second, through our participation in the international Children’s Worlds survey, we have been able to put our UK findings into a wider context. In a sample of 15 countries across four continents, children aged 10 and 12 in England ranked 14th for satisfaction with their bodies and their appearance, above only South Korea. Children in Colombia, Romania and Israel were ranked highest. The differences between countries are striking. While children in Colombia on average rated their satisfaction with their appearance at 9.4 out of 10, in England the average score was 7.8 out of 10. Equally important were the findings on gender differences. England had the largest gender gap in satisfaction with body of all 15 countries. Other countries with significant gender gaps were in the northern half of Europe (Estonia, Germany, Norway and Poland) plus South Korea. Strikingly, there were no significant differences between boys and girls in the other nine countries. In fact in seven countries (e.g. Nepal and Colombia) girls had slightly higher satisfaction than boys. 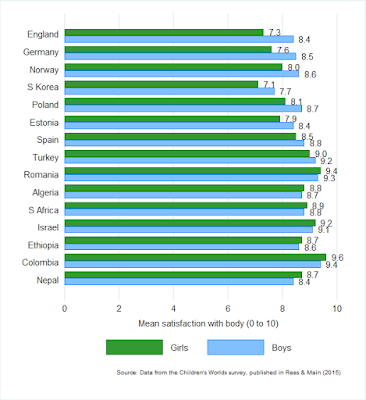 These two additional pieces of information paint a powerful picture. We now know that differences in how girls and boys feel about their appearance and their bodies are not at all inevitable. In fact they are specific to some countries, including the UK. And we have evidence that these differences have become much bigger in the UK over the last decade or so.
Our recent findings have generated substantial media interest and public debate. They have also been consistent with other recent research raising similar issues about the self-image and mental health of adolescent girls in the UK. Key questions remain to be answered.
Why do these gender gaps occur?
And what might be done to address them?
On the first of these questions various explanations have been put forward in the media and public debate. The growing use of social media has been suggested as one possible factor, while higher rates of psychological bullying among girls than boys in the UK is another. At this stage, these are only hypotheses.
Over the last few years The Children’s Society has been speaking to young people about these issues through local well-being consultations which have involved surveys and focus groups in many areas of England.
Feeling judged about their appearance first and foremost - both in terms of perceptions of physical attractiveness and the extent to which they have the ‘right look’ - was a common concern for many of the girls that we have spoken to in our local consultations.

“I feel judged all the time based on what I wear. It’s like girls are expected to fulfil certain ridiculous expectations and no one knows what to wear anymore.” Secondary school age girl
“Most of the time girls are expected to be really girly and wear lots of make-up instead of being able to play sports and be themselves.”  Secondary school age girl
Negative judgments might be made by other girls, boys or adults, and this constant critique resulted in girls feeling upset and frustrated. Some of the comments were of a sexual nature.

“The girls feel pressured by the boys that they should look a particular way and that leads girls into depression or low self-esteem and makes girls feel ugly or worthless.” Secondary school age girl
“Some girls wear make-up to fit in, if you don’t wear it you get insulted. If you do, you get called a slag and get told off by teachers” Secondary school age girl
The local consultations do not offer straightforward explanations for why girls in the UK might be comparatively - and increasingly - unhappy with their appearance, but children’s accounts highlighted the link between bullying and appearance.

“We’re expected to be perfect, like Barbie dolls or something and if we don’t then we get bullied.” Secondary school age girl
“If you don’t look ‘right’ then the other girls are bitchy and start judging you. Personality only really matters to close friends.” Secondary school age girl
Children also felt that adults could be dismissive or unhelpful in addressing negative behaviours, and this could sometimes have the effect of collusion.
Very little was said about social media so it is hard to discern the impact that increasing usage amongst teenage girls might be having on their well-being.

It is clear from our qualitative and quantitative research that negative feelings about appearance can significantly affect children’s and young people’s quality of life. Apart from this immediate impact, we don’t yet know that the long-term consequences of this issue. But recent findings about the far-reaching effects of other childhood issues such as bullying suggest there is no room for complacency.