Why ‘Body Image’ needs a makeover!

July 17, 2017
Discussion surrounding body image in Western societies, both within academic literature and indeed wider social discourses has vastly increased over the last 20 years. From its foundational roots investigating the disordered eating practices of young females, ‘body image’ is now widely understood as a multidimensional concept, incorporating attitudinal, perceptual, cognitive and affective elements (Roy & Payette, 2012). As a result, literature surrounding body image spans multiple disciplines, highlighting the complexity of gaining insight into this universal aspect of the embodied state – an image of the body you have. Even so, with evidence suggesting female body dissatisfaction has decreased over time (Karazsia, Murnen, & Tylka, 2017), it seems the multitude of research informing social understanding and interventions addressing alarming rates of body image dissatisfaction (BID), have been successful.

Foundation or concealer?
As a PhD student who is motivated by positive social change, this suggested progression in research application is extremely encouraging. However, as is often the case in social investigation, this same piece of research which gives me such hope in the positive steps that can be made, also presents many questions. The most pressing of these for me is why no similar significant decrease in male BID was found.

I cannot help wondering if the positive steps which seem to have been made in relation to female body image may not have provided the foundation upon which we might see universally improved body confidence, but merely stippled a heavy concealer where it was considered to be needed the most – for females!

With this in mind, I am not suggesting that research has left us with the impression that only females experience BID or other body image related issues. On the contrary, evidence indicates that whilst reported less frequently, body image related disturbances in males are on the rise (Burlew & Shurts, 2013). This comes as no great surprise when we consider that academic literature on this topic has seen a dramatic increase in recent years. However, whilst this may be the case, lay perceptions of body image and related social discourses appear to remain predominantly feminised. This is something which needs to be addressed as a matter of priority.

The choice between a skirt or trousers
Consider for one moment that as a woman, the choice between wearing a skirt or trousers is an option open to me without question, despite never really giving it a second thought. However, as we often see as the weather gets warmer, males frequently report an inequality in such choices as a result of enforced dress code policies. For example, schoolboys swapping their uniform trousers for the skirt approved only for females, in protest of the absence of a permitted equivalent (e.g. Morris, 2017). 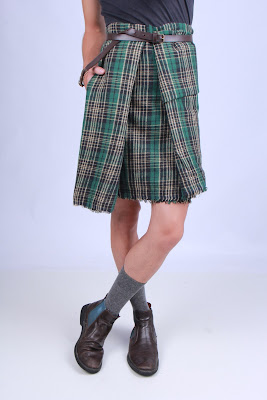 For me, this serves as a great analogy for the discussion of body image for males, in that whilst both may fit, like body image, skirts are persistently gendered as feminine in society. Thus, to discuss this topic, or indeed disclose BID as a male, may be considered far more controversial than a woman discussing the same issue. I suggest that this may not only account for the lower rates of reported BID, but also appear to cause obstruction to gaining an authentic insight into male body image.

For example, when exploring schoolboys' physical education environments, Kehler and Atkinson (2015) found that attempting to gain an insight into body image was often challenging as a result of gatekeepers’ perceptions of body image as a feminine concept, irrelevant in relation to male students. Even so, boys within the study did open up once researchers validated male body image as a viable topic of interest. Taken together with a recent report by EdComs on behalf of CREDOS (The Advertising Association’s ‘Think Tank’) which found an increasing awareness in boys that body image issues are a gender neutral concern (CREDOS, 2016), I suggest we may be seeing a thread of resistance against lay perceptions of body image, as a result of the experiences within these younger age groups.

Interestingly then, it seems that just like the skirt incident, the younger generation in particular, may be the very people to offer the key for challenging common assumptions surrounding body image; as well as provide the understanding required to address the inequality in BID reduction mentioned above. However, whilst this is certainly an exciting prospect for me, given that my research focuses on adolescent male body image, it also highlights the challenges and power of wider social understanding, which may be working against this.

Indeed, provisional findings from my current study exploring social discourses surrounding adolescent male disclosure of BID indicate that, whilst there appears to be some level of sympathy for the relative difficulties faced by young males in discussing issues, there is an equally strong thread of 'man up' or 'it's just a phase' type responses. If we consider my previous point regarding the proposed difficulties for males in admitting that they may have some degree of body dissatisfaction, it seems clear to me that these types of response are not only unhelpful for those currently facing issues, but continuing to breed a culture where disclosure is understood as something to avoid.

This is problematic not only for my research, but for the concept of ‘body image’ in general, which is essentially a universal phenomenon and requires to be understood in this way.

Time for a makeover!
Everyone who has a body will have thoughts and feelings about that body – a body image. The image of the body may be favourable to the individual, or it may not. The point is, that body image is not a ‘girl thing’, it is an ‘everybody’ thing. Perhaps we may put its persistent social feminisation down to the historical roots of research in this area, or perhaps we may find some other way to explain it.  Either way, the social understanding of body image and the discourses these inform require modification, and thus ‘body image’ as a concept appears to be in need of a makeover.

It needs to do away with the concealer and be stripped bare so that the foundation can be reapplied. It requires a rethink on how it is dressed.

In order to do this, we need to ensure the growing body of research evidence recognising body image as a gender neutral concept is communicated at the social level, whilst also highlighting the qualitative differences in the way in which it is experienced and discussed by males. This is why I have recently set up my blog ‘EveryBODY Talk’, where I discuss some of these issues. In addition, I will use this platform to disseminate the findings of my research, in the hope that it will go some way towards increasing social understanding of body image as not a ‘girl thing’, but the ‘EveryBODY’ thing it really is!

Candice Whitaker (Leeds Beckett University). I am a PhD student interested in body image and wellbeing in schoolboys. My research utilises participatory action based methods to explore schoolboy's experience and understanding of body image in their own words. With a particular focus on increasing masculine discourses of body image, my project aims to encourage critical engagement with social representations of embodied masculinities, in order to gain further understanding of the specific issues that adolescent boys may face.